Fascinating Stories of How Pets Can Help Us Heal

Have you experienced having a pet? If yes, then you would know how pets can provide some sort of therapy. Not only do they offer company, but they also ease away our emotional and mental stress.

Below is a compilation of stories from pet owners who have experienced how their pets brought them healing. Get to know their journey and be inspired:

1. Jaclyn and her dog, Bentley

At 24 years old, Jaclyn Lathrop started to have dizzy spells and numbness in her arms and legs shortly after earning her college degree in May 2006. Her physician diagnosed her with severe panic attacks and prescribed medications to help with anxiety. She admitted that she hated taking medicine, and fortunately, she found the path to a panic-free life with her pup named Bentley.
She added that ever since meeting Bentley, she never feels alone. As long as the pup is with her, she feels energetic and happy. Today, over a year since her attacks stopped, Jaclyn is off the meds, bought her own house, and has gotten engaged.

2. Carol and her cockatiel, Suky

Carol Klimentos first met her pet cockatiel named Suky when he was 6 weeks old. She fed him a drop of baby cereal up until he could consume seeds. Now, it’s Suky’s turn to nurse Carol. Carol had foot surgery, and her doctors and the insurance staff told her to spend eight weeks of complete rest in bed.
Carol shared that Suky would sit on her cast and also alerted her husband whenever she tried to get up. “I finally could sleep!” she exclaimed.

Jon Herbert suffered a severe head injury from a car accident several years ago. He has gotten great progress in his recovery, but he is still often restless and has some memory problems. According to his mom, Linda, he easily becomes agitated or upset because of the damage to his brain’s frontal lobe. The good news is, the family’s 15-year-old cat, Bugsy, proved to be a helpful friend to Jon. Bugsy could easily gas up Jon’s day.
Linda explained that Bugsy has a calming effect on her son. When he curls up on Jon’s lap, Jon enjoys petting him and is immediately more relaxed. 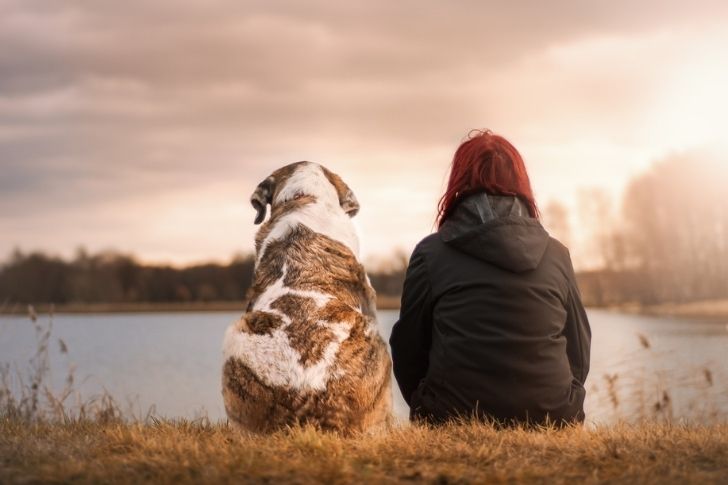 Sandi Sheehan has been having problems getting pregnant since the mid-2000s, and that made her depressed. Her husband continues to remind her that she is already a mother to their pet Australian shepherd named Jake. According to Sandi, Jake has given her a huge degree of love, support, and companionship, especially when she feels like she is at her wit’s end.
Sandi had in vitro fertilization in their home, and her bedside nurse is none other than Jake. The pooch cuddles with her during uncomfortable progesterone shots. He also hops up onto the bed and lies at Sandi’s feet when she feels like giving up.

Retired racing greyhound Joe’s right front leg was amputated. During this time, he went on to stay with Sue Mooney Durango and her family in Colorado.
Months later, it was Sue who needed surgery. She underwent hip replacement surgery and said she received support from her friends and family, a great team of doctors, and most especially, Joe, whom she considers her “son.”

6. Dawn and her stallion, Creshendo

Dawn McLean and her Arabian stallion, Creshendo, met 20 years ago and made an unlikely pair. At the time, Dawn was starting therapy for her depression. Creshendo, on the other hand, was a victim of abuse and was aggressive and untrusting.
When Dawn learned that the stallion needed her care, she kept going despite being tempted to give up. It took her two years to finally overcome the depression. Today, she happily resides in Arizona and owns a horse ranch. Sadly, Creshendo passed away a few years ago, but Dawn said his healing effect endures. She credited the stallion for showing her how to live.