Cats Stared At Their Owner Through A Glass Ceiling

If you have a cat, surveillance is pretty much needed. Some have home security systems in place to see what their feline is up to. Cats aren’t just highly cautious but also quite curious about things. Thus, they can be naturally found in high places in your home or room where they can have a full view of their surroundings and watch in peace. One such famous example is the Ceiling Cat, which became a meme back in the mid-2000s. Do not worry if cats fall from some high places, as they can get down unscathed.

There are also cats that have found themselves behind a glass ceiling. That may sound unusual, but plenty of owners have installed some glass ceilings for their cats. In fact, this is another instance that became viral on the internet.

Let’s look at the example that is given credit to making the glass ceiling cat viral:

In October of 2020, a Twitter user by the tag of @SCMcrocodile shared pics of his friend’s shop in Taiwan, which had some modifications to the shop’s ceiling. The user’s friend put several glass ceiling panels on the roof, which gives customers and employees a small view of the shop’s attic. There are also cats – four, to be exact – who look down below on customers and the staff while meowing and purring. Since it is made out of glass, the people can see these cats, which look like semi-squashed oblong furballs. So if you are wondering what a cat looks like under a glass table, just scroll below!

Aside from the glass ceiling, the Twitter user also posted about what the shop’s cats do aside from monitoring. The user’s post showed these furry creatures and shredded paper on the flooring, which was captioned ‘What happens when the cats aren’t fed on time.’ It showed that, aside from being a surveillance pet, the cats can be quite ferocious, as well. Better hide your essential papers like credit reports from them! 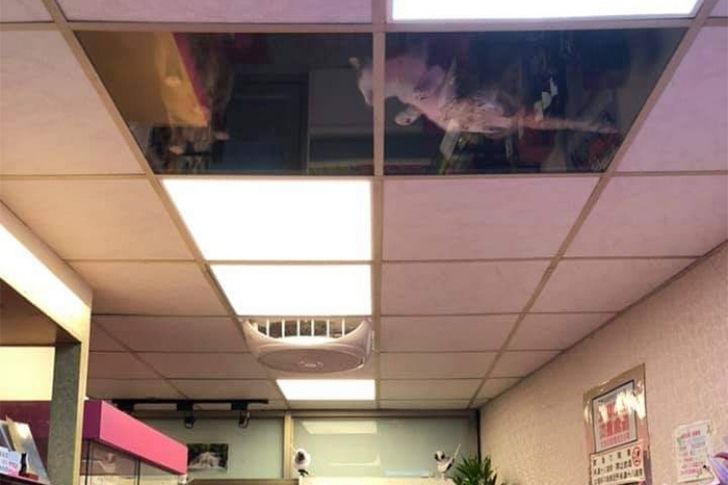 After the post was made, people were quick to comment on how cute the cats were from below. Many commented that it seemed that these cats were looking down on everyone, like the masters that they are. Others made remarks about the cats being some form of home security system, which led to some coined terms like cat ceiling top view (CCTV) or purrveillance. Maybe some people with malicious intentions may think twice before doing their crimes when they see the purrveillance system above.

The post on Twitter became instantly viral, reaching up to 180k likes, and was retweeted at least 67,000 times. It soon found its way onto meme sites like Reddit, where it became quite popular. Many linked the glass ceiling cat to Ceiling Cat, with some saying that the legendary meme is back. They also made funny remarks about the cats, while others were concerned about the cats falling from the ceiling, as the ceilings were dropped ceilings. There was also a video in Chinese reporting on the glass ceiling cat.

There were also some cat owners who replicated the glass ceiling, such as a maze-like glass ceiling for cats to wander and rest into. After all, who doesn’t want to look at a furry ball looking like a squashed mat from below? However, the cost of such modification can be quite hefty. Make sure not to overdo things that it leads to need loans or bankruptcy.